Bissau, the capital of Guinea Bissau, is not exactly on most people’s list of must-visit holiday destinations. It’s a tiny capital city in a tiny country that has been plagued by political instability for more than a decade. Many buildings in Bissau were destroyed during the 1998-99 civil war and haven’t been rebuilt. This, for example, was the old presidential palace.

The roof of the old presidential palace is gone

There are actually plants growing up through the remains of the roof on the right side.

The ruins of the presidential palace

There’s also a lack of basic services, so it’s not uncommon to see sights like this pig (and some chickens, just outside the frame of the picture) rooting around on a rubbish heap right on a major road. 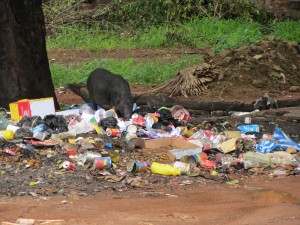 Pig rooting around on a rubbish heap

However, Bissau can also be quite charming. It’s on the sea, with incredibly lush foliage everywhere (even sprouting out of the tops of destroyed buildings). It has a very relaxed pace, and even though there are traffic jams, people don’t become aggressive the way they do in Johannesburg. Just outside of Bissau, there’s a small “resort” along the coast in an area called Quinhamel. Actually, it’s along a river that meets the sea just beyond the resort. Sort of an estuary, I suppose?

A boat by the water at Quinhamel

Just to inject some humour into this post, I thought I’d share with you the house rules at the resort in Quinhamel. They clearly did not have a very talented translator– anyone want to hst a cocu-tail partib? Good luck deciphering the English version.

The importance of translation

I’m also happy to report that loads of delicious fresh fruit grows in Guinea Bissau (or neighbouring countries). There are coconut trees, the mango is divine, and I was thrilled to find fresh-squeezed juice everywhere, including baobab– known as cabeceira here.

Aside from the fruits and juices, Bissau is not exactly a vegan paradise. I found a basic green salad, veggie soup with a few lonely kidney beans in it,  a simple rice and sauteed veggie combo (which was actually labeled as a vegetarian plate on the menu, for which I must give the cafe credit) and a veggie pizza without cheese. It would be tough to be gluten free, but the country is a major producer of rice, so not entirely impossible. And the main crop is cashews, which is great.

The tea selection was definitely the highlight of the hotel breakfast (which sadly is a far cry from the wonderful fasting treats in Addis). I’ve never seen such a huge offering of teas at a hotel: plain black, green, etc as well as flavoured teas and “medicinal teas” to address hypertension, diabetes, belly fat, constipation and a host of other illnesses.

Tea selection at the Residencial Coimbra

I drank the mental clarity tea, with gingko biloba and ginseng, every morning. It tasted nice but I can’t say for sure whether I experienced any major improvement of my mental faculties. In fact, I’m fairly sure there were no magic results after just a few cups of tea. The other nice thing at the hotel was the terrace, which had tables, plants and sculptures. With the heat, the rain and the work, I didn’t get to enjoy it as much as I would have liked.

some of the sculptures on the Coimbra terrace

Stay tuned for more vegan travel. And feel free to share your own vegan travel stories in the comments section.